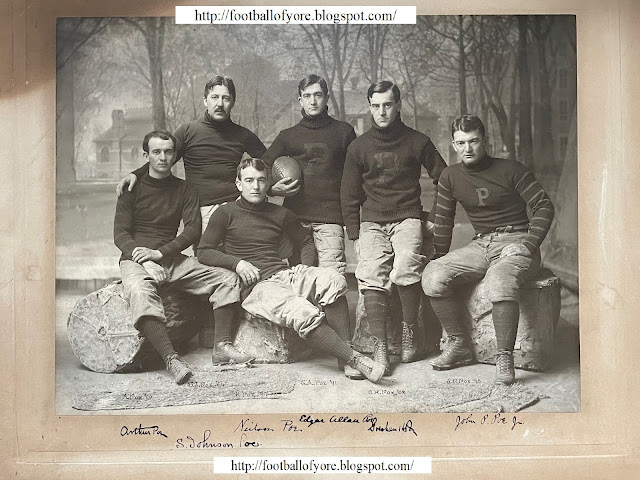 Six brothers from the Poe family of Baltimore, all who played football for the Princeton Tigers, several earning All-American recognition.

We have a fairly large collection of early football photographs and this is arguably the most significant. The fact that this photo is also signed by each of the brothers makes it all the more important. This was our 'Grail' piece.

A Selection Of Some Of Our Favorite Tickets And Passes 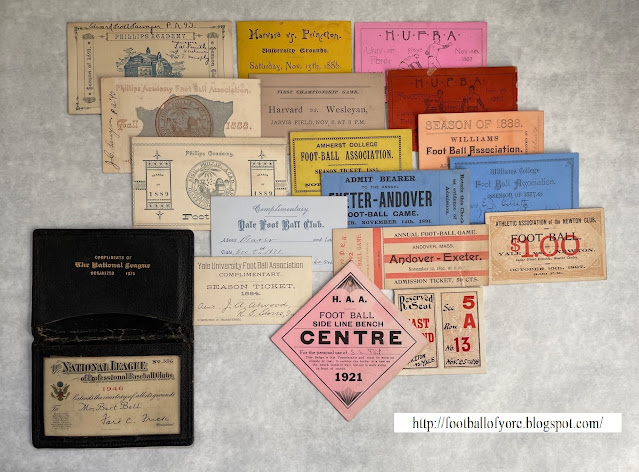 We just went through and picked out some of our favorite tickets and passes this morning. Many are rare examples and some relate to other items in our collection. 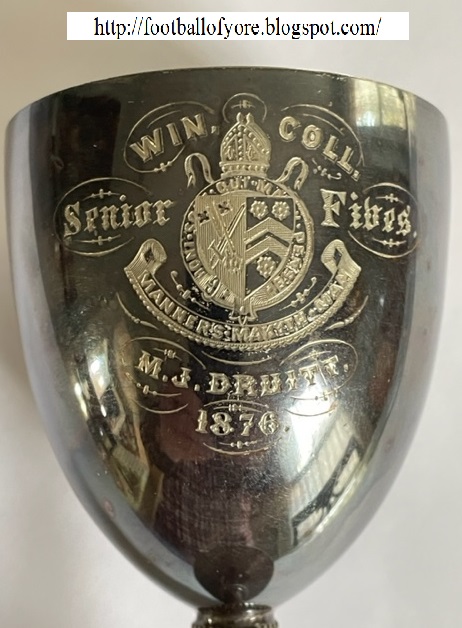 We always look for rarities in sports memorabilia, and when available we like to pick up items that belonged to or were used by the athletes themselves. We have been fortunate to find and collect such football items that belonged to Walter Camp, Mrs. Walter Camp, Glen "Pop" Warner, Bill Edwards, William Church, Mel Hein, Morton Prince, Edgar Wrightington, Johnny Poe, Arthur Poe, Benny Friedman, as well as others. We also have important crew related items belonging to Joseph S. Fay, Fred Plaisted.

The pictured trophy is a sports rarity awarded to Montague John Druitt in 1876 for the Winchester College Fives competition. Druitt (1857-1888) was educated at Winchester College and in his final year there, 1875-1876, was school fives champion and opening bowler of the cricket team. Later in his short life he was known as a cricket player of some note. He became, and remains, one of the leading suspects of being Jack the Ripper. He died in 1888 after what was thought to be an apparent suicide, although it seems more likely that he was murdered, possibly in connection with the Ripper case (?).

Two books have been written on Druitt, Ripper Suspect: The Secret Lives of Montague Druitt and Montague Druitt: Portrait of a Contender . From a sporting perspective, both are very heavy on his time playing cricket.

Significant flaws exist in each theory on who Jack the Ripper was, including one that claims to have DNA evidence.  At the time there was a propensity to blame certain ethnic groups or religions, or to look at social status or believed sexual orientation when assessing guilt for crimes. This held true when looking at the suspects thought to be Jack the Ripper. The police were fully embedded in this skewed assignment of blame as well.  After roughly 134 years it is unlikely we would ever know for sure who the Ripper's identity is.

This is barely a 'scratching the surface' overview of Druitt. For now let it suffice that this trophy is a rare and unique part of history with both its sports and significant Ripper associations.

The trophy is unusual in that all of the engraving, including the school crest is gilt; 6 ¼” in height. 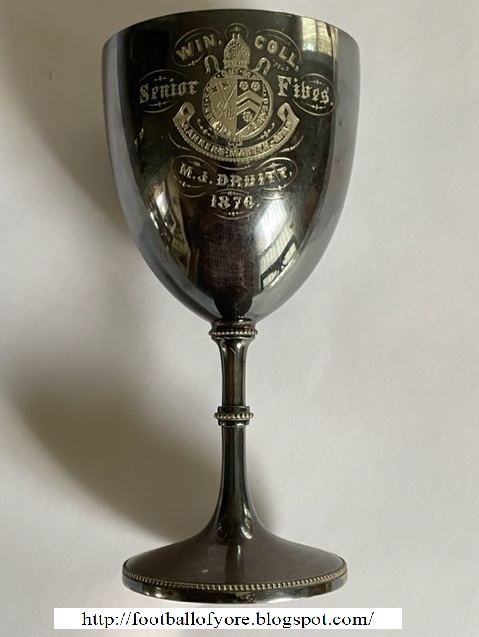 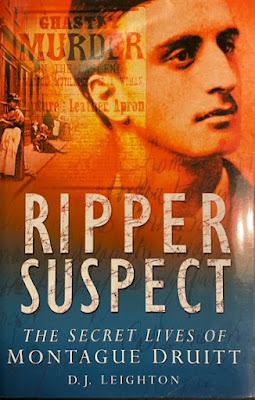 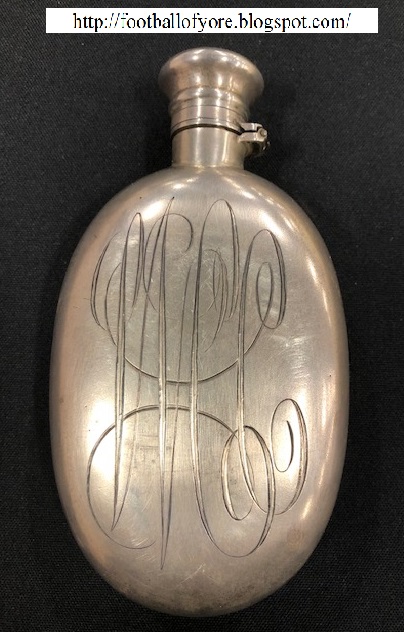 An 1890s sterling silver flask having belonged to Walter Chauncey Camp; WCC monogram.  Providence, RI maker, Knowles, working 1879-1905. Camp is known to most as the "Father of American Football" contributing to its development, particularly through rules changes he initiated. An important piece that is a nice addition to our collection.
The flask is accompanied by a nine page letter from Harriet E. Koehler, written in 1987, when she was 93, about her family and the flask. Her family had a long history of living in New Haven, where she died at 101.
She wrote the letter to give a history of the flask and her family, and stated the intent was to document the flask was "brought into my hands thru perfectly legitimate means, and that my family history makes that clear". She had been in possession of the flask fifty years at the time she penned this letter.
Her father Henry, who died in 1927 worked for 12 years at Yale's Marsh Hall School of Forestry. Two of seven of her brothers (she was the youngest)  worked at Yale in the Gardens and Greenhouses as well. They were also in charge of the horses and wagon stabled at Hillhouse barn, which was used by the Marsh Botanical Garden to dispose of debris. The brothers would oversee properties and clean out houses when they were taken over by Yale, and this included the Walter C. Camp residence. It was her brother Richard (1879-1966)  who brought the flask and other items back from the Camp home.
Related posts, September 28, 2014, June 15, 2015 and November 21, 2013 (a photo that had hung in the Camp home). 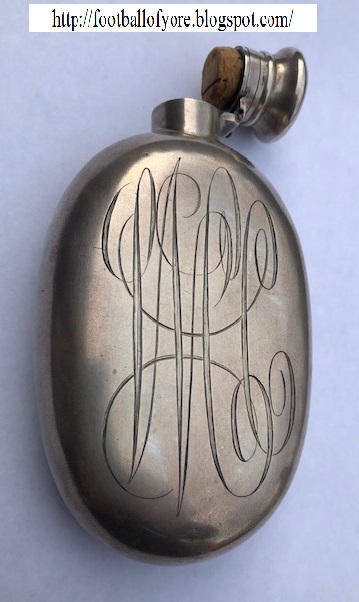 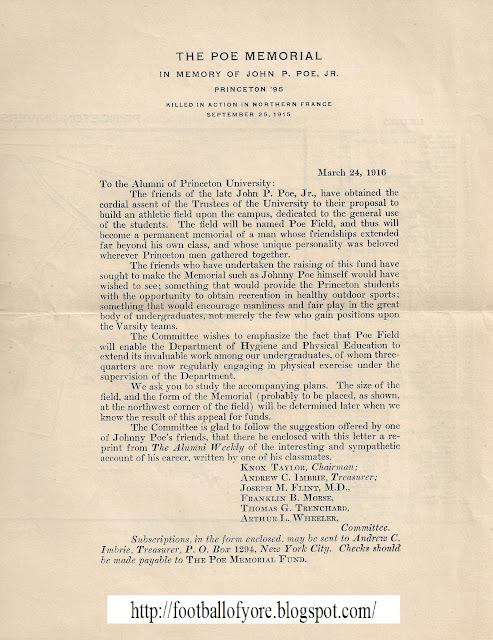 Letter sent to Princeton Alumni in 1916 to raise money for a memorial to Johnny Poe, Poe Field. 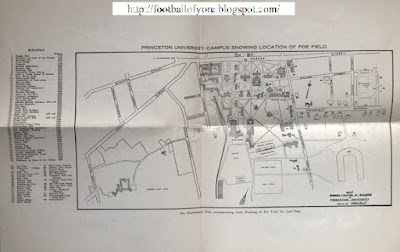 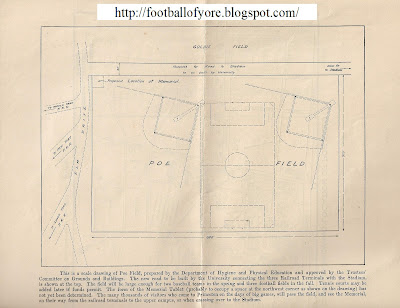 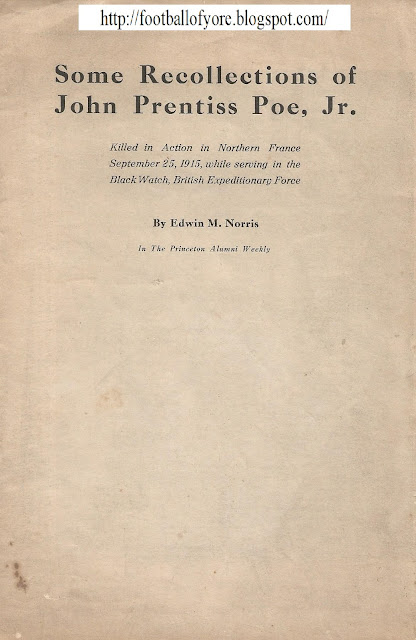 Accompanying the letter was a really neat 16 page publication on Poe I hadn't seen before. It includes letters, poems, photographs and information not found elsewhere.
Posted by Joe at 10:50 AM No comments: 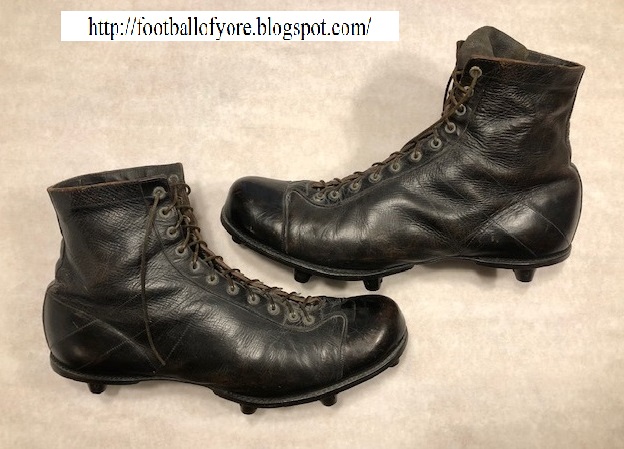 Benny Friedman endorsed/signed products are exceedingly rare and these wonderful cleats are the only ones we've come across in seventeen years. Quality built shoes in great condition. Athco stands for Athletic Shoe Company of Chicago, Illinois. The owner of these shoes, R. Hass carved his name into the soles. The shoes appear to be size 12/13. 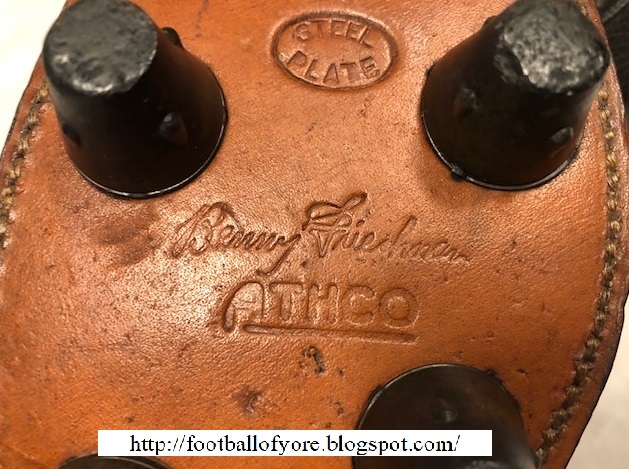 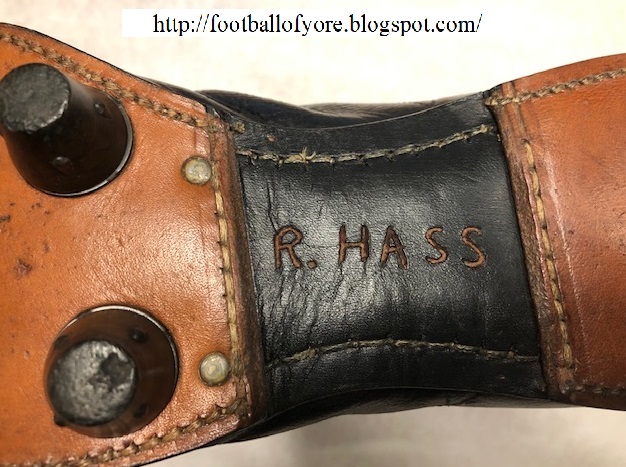 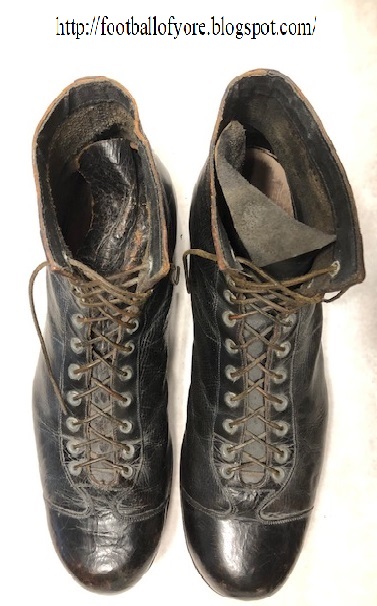 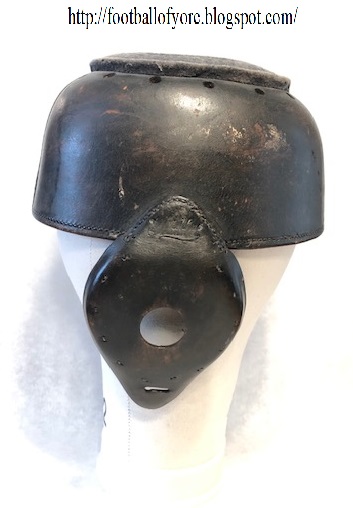 “The day of the armor helmet in football is over”.  Headline from the March 23. 1903, Boston Journal

I came across this helmet at the May 2017 Brimfield (Quaker Acres field at daybreak), purchasing it and subsequently selling it to another collector that afternoon ,with a gentleman’s agreement that when he scaled back his extensive antique helmet collection he would sell the helmet back to me. Good to his word, he brought the helmet with him to this year’s May Brimfield and I bought it back.

When the Intercollegiate Football Rules Association met in March of 1903, it decided  that the hard leather head piece, as worn during the past few years by many players on the gridiron, must be either modified so to lose its capacity of injuring an opponent or must be altogether eliminated. “It has been believed that many of the injuries received in football were due to the use of heavily protecting armor, particularly the head guards, which had grown so hard and unyielding as to give plenty of cause for this supposition”.

These “helmets made of hard sole leather have been used in mass plays as battering rams to butt down opponents…the committee believes this new rule will abolish that feature from the intercollegiate game and restore it to the old Rugby system of open play.”

The actual rule to be passed was not yet known. John C. Bell (U Penn), a member of the committee was quoted after this meeting as saying “What other changes will follow in the way of modifying football armor of all sort I do not know. No rule on the question has been adopted nor do I trust one will be at this meeting”. The committee was made up of John Bell (U. Penn.), Walter Camp (Yale), J. Burchard Fine (Princeton), Professor L.M. Dennis (Cornell), Paul Dashiell (Lehigh and Annapolis) and Robert Wrenn (Harvard).

It would have been at this time this helmet would have been produced, to satisfy the intent of what the initial suggested rule would address, a modification to prevent contact with sole leather, in this case by incorporating a felt/wool ring on the top of the helmet.

When the  rules committee issued the final rule, a few short months later,  it read “If head protectors are worn , no sole leather, papier mache, or other hard or unyielding material shall be used in their construction…” .

To conform to this rule, which specified that no sole leather whatsoever could be used in the manufacture of helmets, Spalding could not market this helmet, and came out with the pneumatic helmet (No. 70) as well a less expensive line of helmets they termed “Gray” head harnesses, made of soft leather (No.45) or canvas (No. 55).

This helmet is based on a helmet design that differs slightly from the Spalding No.60 (that was currently Spalding’s top of the line helmet),  based on G.L. Pierce’s Head Harness Patent pictured below.

The helmet is embossed with “The Spalding” on both ear flaps, the designation reserved for its top of the line products.

This helmet is an absolute rarity, previously unknown to our hobby, being the only known example. 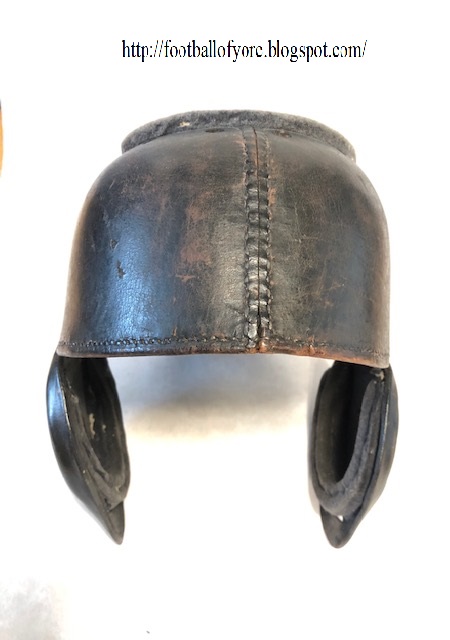 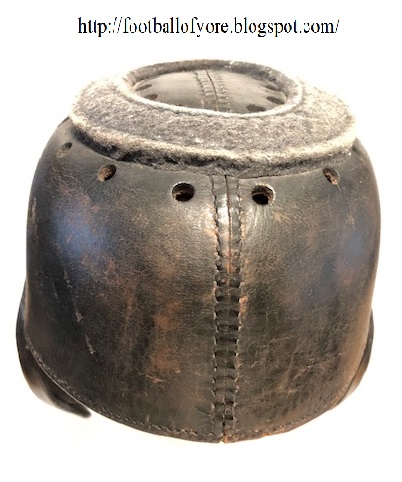 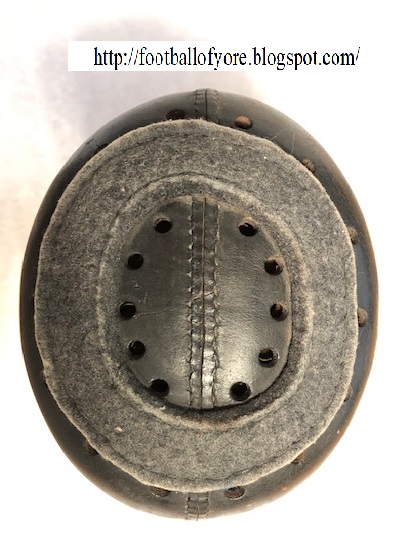 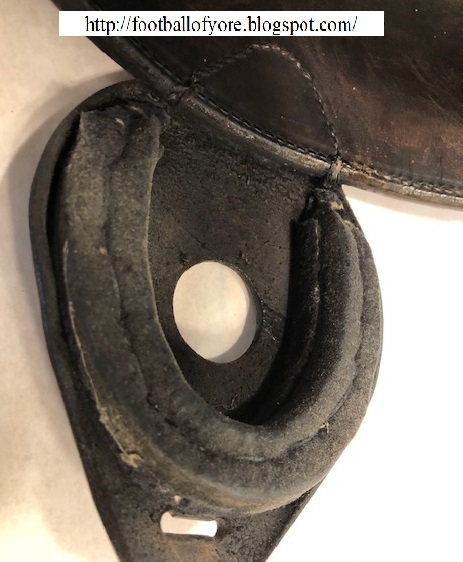 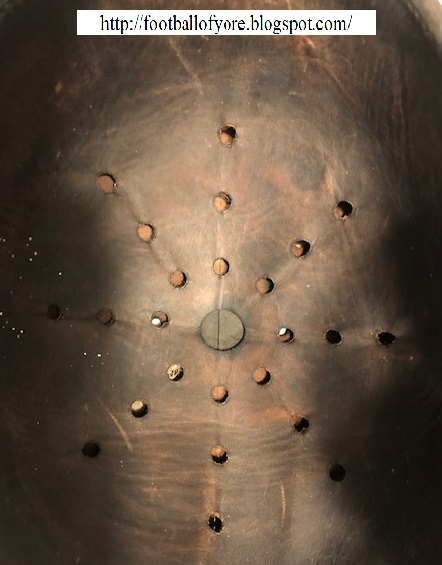 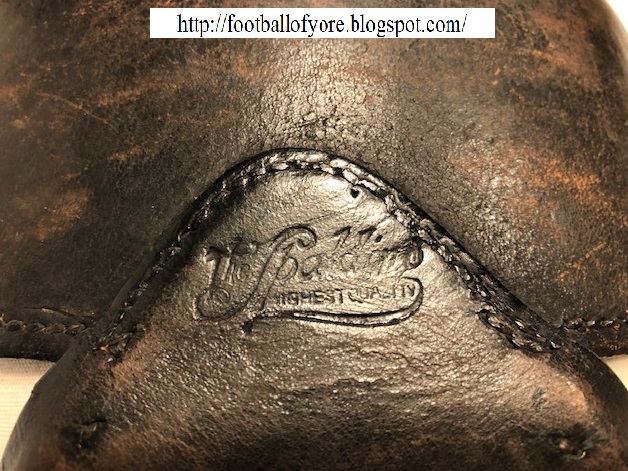 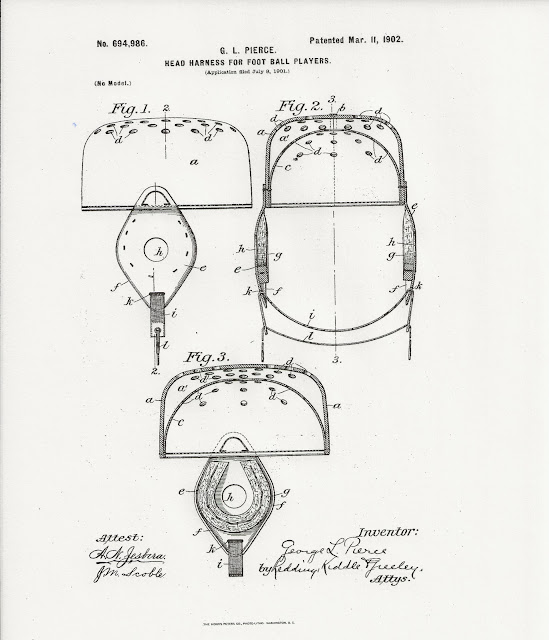