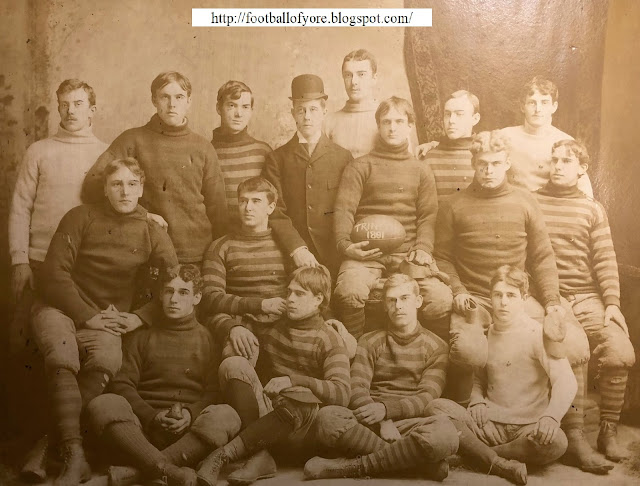 We don’t tend to discuss Trinity College in Hartford (not to be confused with Trinity of North Carolina (became Duke) or Canada) as much as we do the schools she played against in the 1890s. In 1891, the year this photograph was taken, Trinity had games with Brown, Yale, Harvard, MIT, the Boston Athletic Association, Columbia, Penn and several others, and went on to a respectable 6 and 4 for the season. Trinity has an early football history, dating back to 1877. See related blog entry dated August 22, 2018.
There are three versions of this photo we have seen. We picture the larger team photo that is in our collection and a smaller cabinet card we know of for comparison. All three versions were done at the same sitting and as you can see, the differences between the two photos in this posting are minor, such as a turned head and a removed vest. 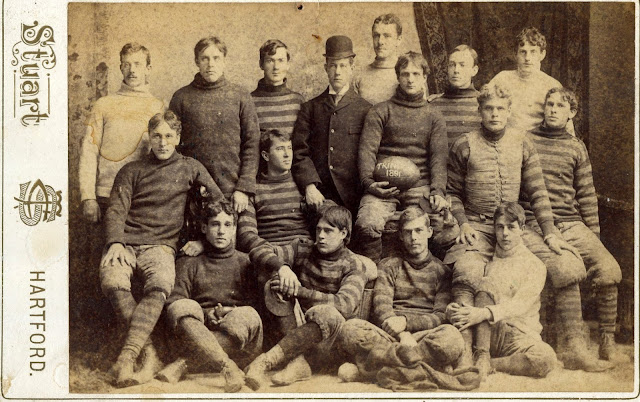 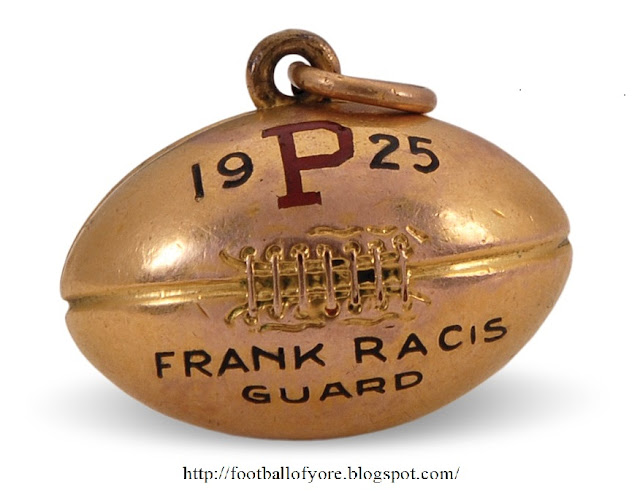 Following the 1925 NFL season, one of the most controversial on record, a banquet was held for the “1925 World Champions”, the Pottsville Maroons, at the Hotel Allan in Pottsville.  Awards and keepsakes were distributed to all members of the team, the team that had won the Championship, which was only the beginning of a larger and more convoluted story.
This gold charm was awarded to Pottsville Maroons guard Frankie Racis at that event. The charm has the  following engraved on it:  “19P25”, “Frank Racis”,”Guard”, “Pottsville Maroons” and “Worlds Champions”. To our knowledge, at this time no other team member’s gold charm has surfaced.  A photograph of this exact charm appears in “Breaker Boys: The NFL’s Greatest Team and the Stolen 1925 Championship “, David Fleming, 2007 (11 pages into the photographic section). The awarding of the charms is discussed on page 233.
To better appreciate the Maroons story, rather than repeat what has been covered in past blog entries, I would ask that the reader go back and look at these postings ( please see the entries dated March 26, 2018 and March 23, 2017 in particular).


Unquestionably one of the rarest and most desirable of all Championship charms, and one of the more important pieces of Maroons history. 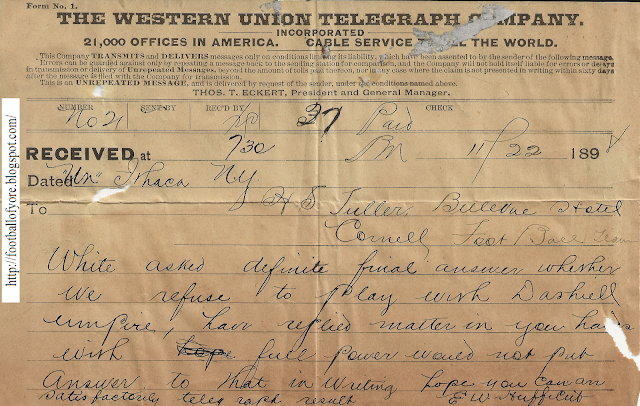 These guys really didn’t like Paul Dashiell.
This telegram was to Hiram Tuller, the manager of the 1898 Cornell varsity football team from E.W. (Ernest Wilson) Huffcut, law professor and president of the Cornell Athletic Association. The telegram mentions that “White”, Captain A.E.  Whiting, wants a final answer to whether Cornell will refuse to play their annual Thanksgiving day game against the University of Pennsylvania if Paul Dashiell is to be the Umpire.
They did end up playing the game, which was two days later, and Dashiell was the umpire (interesting note – William Henry Lewis was the timekeeper for the game).  The game was played under horrid conditions, during a storm with several inches of mud covering the field and freezing temperatures. Casper Whitney was quoted as saying that these conditions “combined to make it a day of utmost severity on the players, the hardest in my recollection”.  During intermission the Penn players changed from their wet uniforms into dry ones. Coach Woodruff of Penn said that he “attributes Pennsylvania’s victory more to this fact than to any other one particular thing” and that “if the men had not been able to change their suits they would have been unable to finish the game. Some of the men were so cold they were almost helpless”.
Pennsylvania won the game, played in Philadelphia, 12 to 6.
Dashiell was considered by most the premier umpire in the East (Everts Wrenn being "the West's greatest umpire")  and was sought after for the more important and larger football games of this period. He was known for coaching at Navy, first as an assistant for just over a decade (under Josh Hartwell in 1893) and then as head coach for several years after that. He was also known for his work on the Intercollegiate Football Rules Committee, serving with the likes of Bell, Moffat, Walter Camp and others, which made him uniquely qualified to umpire.
In 1902, controversies involving Dashiell arose and he was accused of biased decisions and the failure to make calls. This was of particular note in the press for the Yale - Princeton game of that year. As one midwestern  newspaper put it,  "umpire Dashiell seems to have become blind in some of those numerous eyes the eastern critics credited him with". Also this same year Cornell made it known that Paul Dashiell will not be allowed to umpire any more games in which the Ithicans take part. It appears Cornell had had its issues with Dashiell as far back as 1896.
The Harvard –Yale game of 1905 had its share of brutality. The difference now was that President Roosevelt was taking notice. Dashiell was umpiring that contest and refused to penalize James Quill of Yale for blatant unnecessary roughness and slugging.  Dashiell was called on the carpet by Roosevelt who said to coach Reid of Harvard that he was not sure Dashiell was the kind of man that should be teaching the cadets at
Annapolis . Dashiell was never to officiate another Harvard – Yale game and Roosevelt now had a man under his thumb on the rules committee to help reform the game. 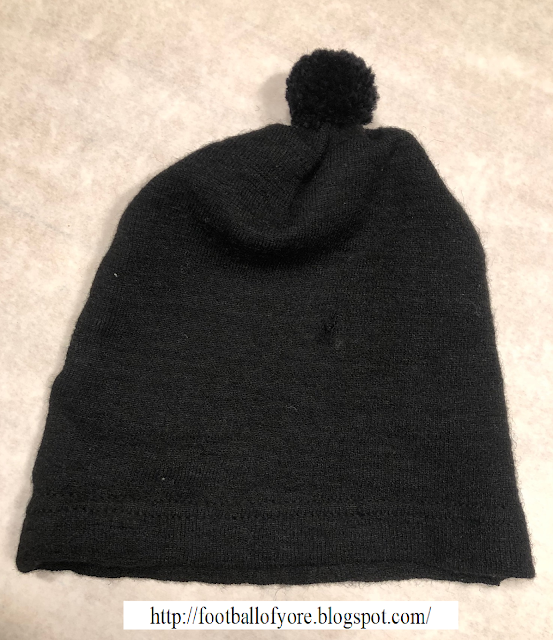 We have seen roughly seven or eight wool caps in collections, most identified as “football” caps, primarily from the late 1870s up through the early 1890s. Over the years it has become apparent to us that such caps, although more commonly worn by football players of the period were also worn by team members of crew, lacrosse and even roller polo. It is unlikely these could be routinely differentiated from one another. Such caps may also have been non-sports related, although their rarity suggests this may not have been usual.
A review of many early football photographs also reveals that it is common that team members may have worn many different types of caps. The shorter wool cap, the stocking cap and any number of other hat/cap varieties. More mainstream teams with larger budgets often exhibit many of the same or similar caps being worn by the team members.
It would be nice if one could tie these wool caps to a legitimate provenance or photo match it to a player or team. This of course would be the exception rather than the rule.
The wool cap pictured in the two photos above is worsted wool, in pretty good shape with some thinning and one hole that is non-obtrusive. It is all black, without any striping.  For just a few photographic examples of this type of cap see our blog entry dated January 21, 2014. Many similar examples can be found on our blog or on the internet.
It appears that it is constructed in the same manner, including the lower seam as those in the period advertisement below (506). This advertisement is pictured in an article on the Antiquefootball.com. site.

As an aside, my favorite cap photo, which illustrates the point that there was not a standard convention for this particular type of equipment, is pictured below (note the length and style of the stocking cap). 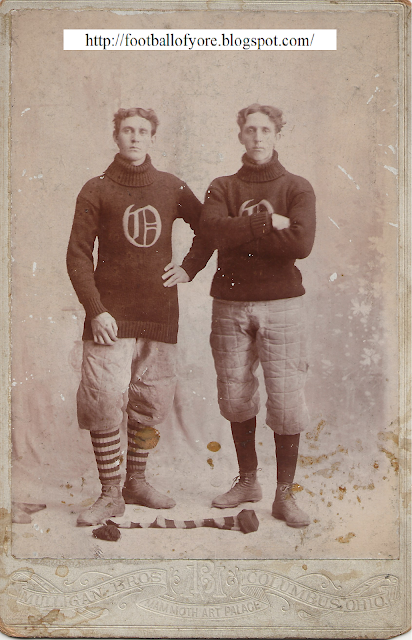 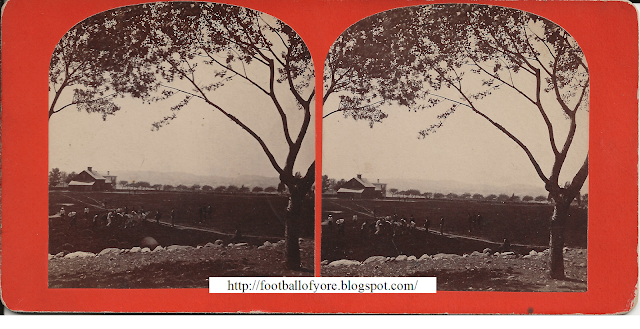 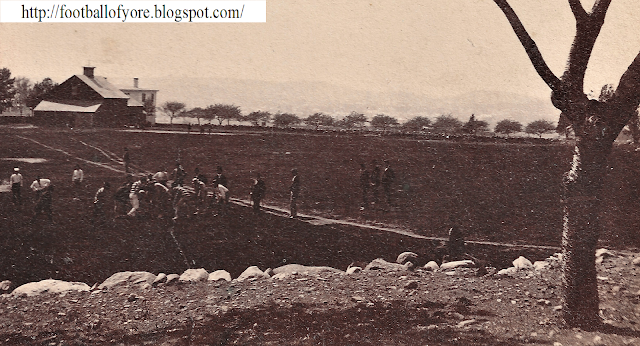 Close up of the game


Postponed twice, on both October 16th and again on October 26th, the second match of the year between Harvard and Tufts was played on Wednesday, October 27. The College Elevens met at College Hill in Medford (the first match having been played on Jarvis Field at Harvard in June, won by Tufts) late on a very windy fall day, the game starting at 3:30. The game consisted of three thirty minute periods; however the game ended early due to darkness in the last half hour.
The Crimson were dressed in dark trousers and white shirts, the Tufts men dressed in their “broad-striped” long sleeved jerseys and white trousers. This stereoview is the companion view to the Tufts team stereoview in our blog entry dated March 23, 2014. This match was played in the rugby-style football manner as was their earlier match, therefore this game was only the second rugby-style football game played between American colleges, the June match being the first. Harvard won this match, despite notable disputes, by a score of one goal to nothing. The Springfield Republican reported "the wind and a "false call" gave the Harvards the game, it was admitted on both sides that the Tufts boys did the best playing".
In 1875 Harvard played four games, two against Tufts, one against All-Canada and one against Yale. Tufts played only the two games against Harvard in 1875. Apparently their win in June against Harvard dissuaded teams from playing against them and was the reason the Boston YMCA forfeited their scheduled game.
Playing for Harvard:  Faucon, ’75, Hall, ’76, Seamans, Herrick, Cushing , Cate, Curtis, Keys, ’77, Wetherbee, Lombard, ’78 and Blanchard, ’79.
Playing for Tufts:  Aldrich (Captain), Headle, Dwinnell, Fletcher, Eddy, ’76, Whithead, Harrington, Branch, ’77, Campbell, ’78, Perry, Fuller, ’79.
This is a significant and historic photograph. Football photographs from this period are scarce and this stereoview is an incredibly rare example. This is the earliest photo of a game in progress known to our hobby.
Posted by Joe at 9:14 AM No comments: 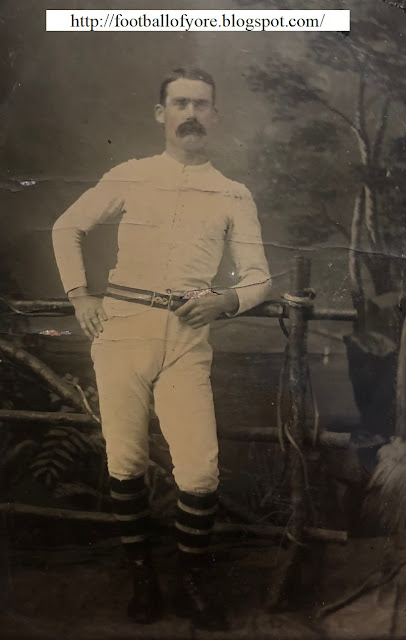 This is a pretty special football piece, the significance of which I think I would have trouble overstating.  A rarity in every regard, James Naismith photographed posed in his football uniform in 1885 at McGill University. A football tintype is fairly rare, and one of a well-known sitter is unheard of. This tintype is possibly unique in this regard. Naismith was the inventor of basketball, and likely the first to devise head and ear protection in football. 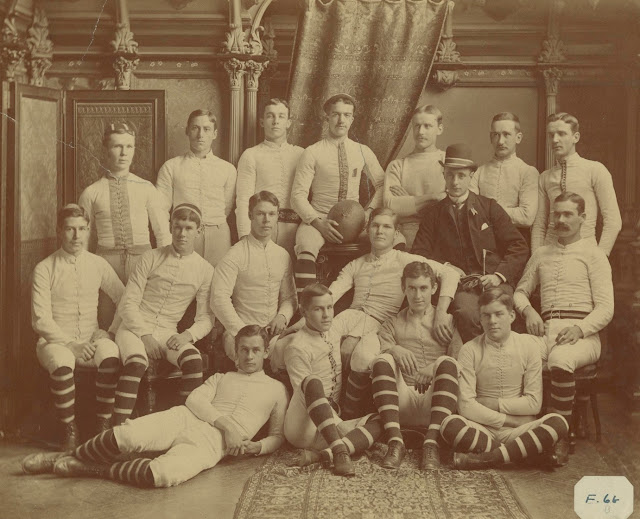 The 1885 McGill Football team, Naismith seated at far right wearing the same long sleeve white canvas lace up vest, pants and belt as in the tintype (Note: tintype images are reversed). Permission to use this Notman team photo was granted under written license obtained through the McGill University Archives.
See related blog entries on tintypes (August 11, 2014, November 3, 2014 and October 19, 2016).